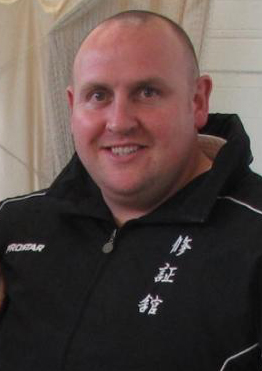 Sensei Paul Jones is currently a 5th Dan Black Belt and holds the rank of Shidoin. He is a founder member and also the President of the Shushokan Shito-ryu Karate Organisation (SSKO).

Training in Shukokai since he was 7 years old Paul has trained with several of the great Japanese Shukokai Karate Teachers including Kawata Sensei, Ishitobi Kazuo Sensei and the late Kimura Shigeru Sensei and Yamada Sensei.

Alongside his training with the Japanese Masters, Paul has trained and studied under some of the most well known Western Shukokai exponents including Hanshi Paul Mitchell, of Samurai Karate International, Shihan Eddie Daniels, of Kimura Shukokai International and of course his direct teacher of many years Shihan Tom Beardsley.

Links with Japan
Paul has visited Japan 13 times in his quest to study the traditional teaching methods practised in the Karate school of Shukokai and to accurately replicate those methods and approaches in the UK. Paul’s experience in Japan, combined with years spent competing and coaching allow him to deliver an exciting, challenging and rewarding form of Karate for his students.

Club and Association Training
Paul runs four Shushokan clubs at; Ludlow, Brecon, Monmouth, and Hereford. He holds an enhanced CRB check and current instructor insurance. Paul is the grading officer at a number of other clubs in the Association. He also organises and leads the regular monthly Shushokan senior grade training which draws together the senior grades from all Shushokan clubs.

As we continue to follow the government guidelines regarding COVID-19 our Dojo’s are required to remain closed.

We thank you for your continued support during this time.

For details of the Zoom Sessions for your Dojo check out the Club Facebook page, the Shushokan Shito-ryu Karate Organisation Facebook group or contact your Club Instructor directly.

If you do not wish to join Zoom Sessions then our Shushokan Online Training Facebook group and the Member Training Videos on this site will remain in place - you can access them by following instructions below.

**With the Zoom sessions taking place the Video page will be updated less frequently.

Please check in regularly with with our Facebook groups & Website. We will be posting updates and of course guidance of when the Government will allow our dojo’s to open again.

We would politely ask that you do not cancel your Club Membership payments during this enforced closure.

All Dojos are working hard to provide a training platform for all members and we thank you all for your amazing continued support.

This will help guarantee that your Club is still there for you when it’s time to start training again.

Continue to Stay safe, follow the government guidelines and of course keep practising your karate at home.

We look forward to seeing you all back on the mat as soon as its safe to do so.