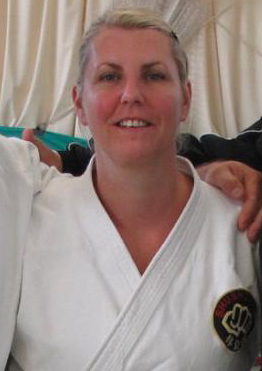 Sensei Lou Vaughan is a Black Belt 4th Dan Shidoin, specialising in the Shito-ryu Shukokai form of Karate. She has been a qualified martial arts instructor for over 12 years and is a founder member and Secretary of the Shushokan Shito-ryu Karate Organisation, one of the leading Shito-ryu Shukokai Associations in the UK.

For her own continuing development Lou has visited Japan on 14 occasions to study and train under the supervision of the leading Japanese experts in the Shito-ryu Shukokai style. In 2009 Lou was graded to 3rd Dan in Japan by Yamada Sensei, 9th Dan, the President of the Shito-ryu Shukokai Union and in 2012 to Shidoin by Shihan Ishitobi Kazuo. Lou received her 4th Dan in 2015.

In 2017 Lou was appointed to the Board of the Welsh Karate Governing Body and also took on the role of Manager of the Official WKGB Welsh National Squad.

Club and Association Training
Lou runs two club nights in Shrewsbury; the first based at the sports centre at the Mary Webb School, Pontesbury, and the second at the Lanterns Centre in Harlescott. Lou’s other club nights are at Builth Wells and Bromyard. Lou has experience of working with children and young people in various schools and holds an enhanced CRB check.

Shushokan Karate (6+ to adult) – a structured training programme using a system and methodology which has been developed by the Shushokan Shito-ryu Karate Organisation, based on the Shito-ryu Shukokai style of Karate the emphasis is on awareness and self control coupled with speed and forceful defence.

As we continue to follow the government guidelines regarding COVID-19 our Dojo’s are required to remain closed.

We thank you for your continued support during this time.

For details of the Zoom Sessions for your Dojo check out the Club Facebook page, the Shushokan Shito-ryu Karate Organisation Facebook group or contact your Club Instructor directly.

If you do not wish to join Zoom Sessions then our Shushokan Online Training Facebook group and the Member Training Videos on this site will remain in place - you can access them by following instructions below.

**With the Zoom sessions taking place the Video page will be updated less frequently.

Please check in regularly with with our Facebook groups & Website. We will be posting updates and of course guidance of when the Government will allow our dojo’s to open again.

We would politely ask that you do not cancel your Club Membership payments during this enforced closure.

All Dojos are working hard to provide a training platform for all members and we thank you all for your amazing continued support.

This will help guarantee that your Club is still there for you when it’s time to start training again.

Continue to Stay safe, follow the government guidelines and of course keep practising your karate at home.

We look forward to seeing you all back on the mat as soon as its safe to do so.