`The way of the empty hand`
Although the very early history of Karate is shrouded in mystery it is generally believed that the origins can be traced back to both the Indian sub-continent well over a thousand years ago and to China possibly as early as the fifth century B.C. A Chinese legend from around this time, the story of the Maiden of Yue, describes a system of hand to hand combat including the notions of hard and soft techniques.

Bodhidharma
Legend also has it that a Buddhist monk, from India, by the name of Bodhidharma arrived at the Shaolin temple in China where he taught Zen Buddhism. Concerned at the physical and spiritual condition of the monks he also introduced a set of exercises designed to strengthen the mind and body, exercises that allegedly marked the beginning of the Shaolin style of temple boxing. Bodhidharma’s teachings later became the basis for many of Chinese martial arts (wushu) which proliferated around this time. The Shaolin style of wushu is regarded as the first codified Chinese martial art. It is frequently, but incorrectly, called Kung Fu which simply means something gained by long years of study.

However a book written by a Ming general, Qi Jiguang, included descriptions of the Shaolin fist principles and as this book spread to East Asia, it appears to have had a significant influence on the development of all martial arts in regions such as Okinawa and what was to become Korea.

Crucial To The Development Of Karate
Okinawa is the main island in the chain of Ryukyu Islands, which stretch from Japan to Taiwan. The Ryukyu Kingdom was once an independent kingdom occupying the island chain, and for much of its history the Ryukyus paid tribute to the Japanese Shogun as well as the Chinese Emperor. Ryukyu was also the cross road for a number of major South East Asian trading routes including those between Japan and China. These dual political and commercial allegiances, and subsequent movement of people and ideas, were crucial to the development of Karate.

Closed Fist Fighting
In its early stages, in Okinawa, Karate was a form of closed fist fighting called, or empty hand. Further development came with the influence of other martial arts, especially from China, brought by travelers and merchants to the island. Te continued to develop over the years, primarily in three Okinawan cities: Shuri, Naha and Tomari. Each of these cities was a centre to a different section of society: the nobility; merchant classes; and farmers and fishermen, respectively. For this reason, different forms of Te developed within each city and subsequently became known as: Shuri-te, Naha-te and Tomari-te, collectively they were called To-de or Chinese Hand. Gradually, two main groups were formed: Shorin-Ryu, which developed around Shuri and Tomari and Shorei-Ryu from the Naha area.

`to de` or `chinese hand`
The Chinese characters used to write To-de or Chinese Hand can also be pronounced ‘Kara Te or empty hand. With the Japanese annexation of the Ryukyu Islands the term Chinese Hand was dropped from common usage and Karate came to mean ‘Empty Hand’.

The ‘Do’ in Karate-Do means ‘way’ or ‘path’, and is indicative of the discipline required in order to be successful at Karate and also the wider philosophy of Karate.

Karate Today
The first public demonstration of Karate in Japan was in 1917 by Gichin Funakoshi, who was also instrumental in changing the name to Karate-Do. 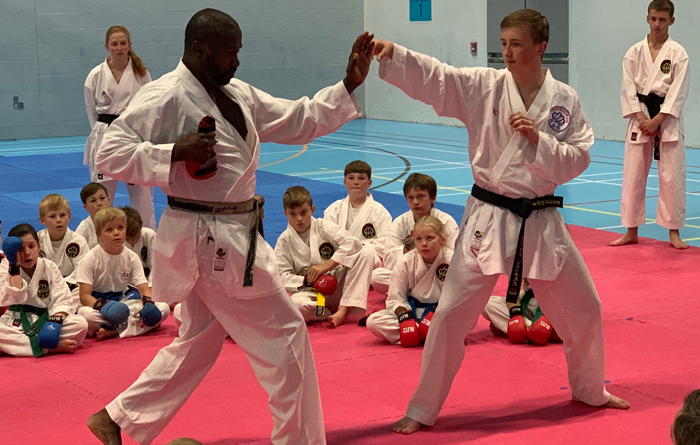